TheraCyte, Inc. was founded in 1999 as a spin-out from Baxter Healthcare Corporation.  The company is based on a proprietary medical device technology developed by Baxter scientists to deliver cell and gene therapies.

This development effort resulted in a number of innovations in the design, construction and use of certain biocompatible materials, and is protected by 20 U.S. patents as well as numerous associated foreign patents and patent filings.  The TheraCyte™ technology has also resulted in over 80 scientific publications over the past several years.

The breadth and effectiveness of the TheraCyte™ cell delivery platform has been shown by a large number of animal studies using a wide variety of therapeutic agents.  TheraCyte™  has been used to correct diabetes in rodents and deliver molecules such as Human Growth Hormone, cytokines, monoclonal antibodies and Erythropoietin using genetically engineered cells.  Most importantly, TheraCyte™ devices have been shown to be safe and effective in humans for up to one year. 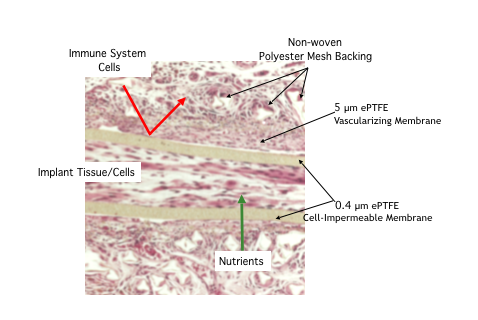 The TheraCyte™ system provides for long-term delivery of proteins without the necessity of frequent injections, immunosuppressive drugs, or external pumping devices.  Device membranes protect the enclosed tissues from rejection by the host’s immune system while allowing the therapeutic product to freely diffuse from within the device